Why we need to talk about class in Classics

When state schools are forced to offer narrower subject choices, the student experience in higher education is affected. But it also narrows social change and, arguably, the development of societies as a whole writes Claire Simpson, Philanthropy Communications Manager in Development and Alumni.

A crisis is looming for Classics. The subject, often perceived as elitist, is becoming harder to access for many working-class students, as many forms of Classics teaching disappear from state school syllabuses, especially in Scotland. Staff in Edinburgh’s School of Classics are working to tackle this challenge and improve class diversity.

Student Support Officer Lauren Porter has always had a fascination with ancient history, especially Egyptology, but there wasn’t much opportunity to explore that interest academically at the school she attended as a teenager. Instead, she expressed her enthusiasm for the subject informally, reading books and watching documentaries, and left school at 17 without any qualifications.

A job in outdoor education followed, teaching young people and adults how to use high ropes apparatus safely. It sounds like a lot of fun but after a few years Lauren was clamouring for something else and that passion for ancient history was gnawing away at her. 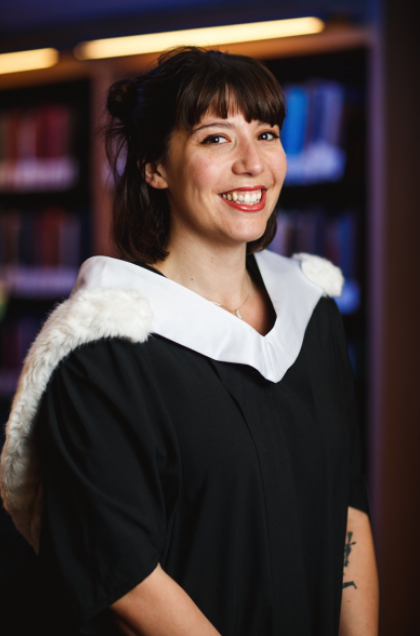 She hatched a plan. She was going to university. But without A-levels, she needed to do a full-time access course. So, she spent a year working in temping jobs to save enough money to pay her mum a year’s worth of rent in advance so she could move back home, supplementing her income with part-time work in a hotel, where she did coursework surreptitiously during the quiet shifts on reception.

At college, she was discouraged from applying to the best universities, but undeterred she exceeded the requisite marks for a place on the MA in Ancient History at Edinburgh, surpassing her own expectations too. Today, she has her degree and now works at the School of History, Classics & Archaeology, helping others navigate life at the University.

“I just loved it so much. I just fell in love with the whole thing. I worked so hard,” says Lauren. “I did so badly in all my essays at first. I write how I talk and I’m dyslexic, so I had to learn how to write formally. The first year I just got the worst marks ever but during the second year they started to build a little and by third and fourth year, I realised I cannot do exams but I can do essays and I managed to graduate with a 2:1, which was amazing. If anyone asks me what my biggest achievement has been, I say I got a 2:1 in Ancient History. My certificate is in front of me now – I look at it every day.”

When Lauren joined the University of Edinburgh as a mature student in her late twenties, she was aware of being different. Not only did she come to university through a less conventional route, missing some of the basics in Greek and Latin that her student peers had benefitted from, she also has a visible limb difference – she was born without fingers on one hand. However, it was her working-class background and her experiences of dealing with financial pressures, which sometimes left her feeling alienated from some of her course mates.

This motivated Lauren to get involved fully with the life of the School, becoming a rep for the Edinburgh University Students Association (EUSA), joining societies and taking on media projects to make ancient history more accessible.

“When I got into second and third year, I could see a real disparity so I started to really push for anything on widening participation. I joined a lot of the societies just to talk to more students and see everyone else’s experiences, and then in fourth year I got voted in as the EUSA rep for the School and I would go to all these meetings and I would pretty much say ‘let’s be more accessible’. It is literally everything I pushed,” says Lauren.

Students with similar backgrounds to Lauren’s can be few and far between in the School of Classics at Edinburgh, or indeed any other British university. The subject area has long carried a reputation for attracting privileged privately educated students. It’s a reputation that’s not unjustified. Less than half of students enrolled in Edinburgh’s School of History, Classics & Archaeology for 2019/20 were state educated.

Dr Lucy Grig, Head of Classics at Edinburgh says: “There is a perception that Classics is something of an elite subject and it’s a subject that in Scotland very few students get a chance to study at school, so there’s not much classical civilisation taught in schools and less Latin, let alone Greek, so it’s often a subject that we’re keen to let people know about because you can start it from scratch and you can study it as an outside subject. It’s really something that students from many different walks of life can come to and we want it to carry on that way.”

Practical steps to make a difference

The Classics team at Edinburgh is working hard to introduce young people locally and beyond to the subject through a busy programme of outreach activities and events. Edinburgh is involved with the Literacy through Latin project which sees student volunteers visit local primary schools to introduce pupils to Latin and Roman culture. Summer schools strive to make the subject and its associated languages more accessible, while teacher training events offer support around delivery of the Higher in Classical Studies. Many staff and students in the School of Classics are involved in giving talks to schools and the public. The Covid-19 pandemic has of course moved some of this work online, but bringing the subject to a wide range of people remains high on the agenda.

While prospective undergraduates interested in the large range of degrees don’t need to have prior study of Latin or Greek to apply for entry, the MA Classics undergraduate degree programme does require Latin or Greek at SCE Higher or A-level, or equivalent. This is something the School is seeking to change. With so many state schools dropping these subjects, these entry requirements for this specific degree pose a significant barrier to anyone who hasn’t come through the private education system, where you’re more likely to have been exposed to teaching in classic civilisations, Latin and Greek.

Dr David Lewis, Lecturer in Greek History and Culture at Edinburgh, was appointed Classics Outreach Officer just before the Covid-19 pandemic struck, and believes there is the potential to engage more people with Classics study, but wider education policy will do nothing to prevent the subject from becoming increasingly elitist.

“There’s an enormous appetite for engaging with this topic,” he says. “Education is not just about skilling people for the marketplace, it’s about the intellectual formation of citizens. So you should know about your own history, your own country, languages, philosophy, literature, things like that. It’s obviously enriched my life a lot and it would be great if other people had the same opportunity, but the structures need to be put in place to translate that demand into supply.

“It is not just the case that bright students in state schools don’t get the opportunity to study Classics or classical languages and have to work hard to catch up later: it’s that Classics often isn’t even on their radar,” David continues. “It is something largely taught in fee-paying schools. This fact has an impact on various other kinds of inequality, where students from the BAME community for example are on average more likely to come from a lower socio-economic background.”

The dangers of not acting now

A lack of diversity within the student body, can lead to a “monoculture,” he says, which can have a negative impact on the experiences of those other students who feel like outsiders because they look, talk, think, or simply, experience life differently.

“You don’t have all the cultural capital that’s been accumulated in a fee-paying school that allows you to navigate seamlessly in a kind of environment which – just in terms of numbers – is disproportionately dominated by people from one particular demographic. You therefore can feel in a minority – maybe you’re not so sure of yourself; maybe you self-censor; maybe you don’t speak up in tutorials when you know the answer, and give way to others from a more privileged background. There are all sorts of complex interlocking problems that these structural inequalities create,” explains David.

The School of History, Classics & Archaeology is working to better understand the experiences of all students to help foster a greater sense of belonging for everybody. In Classics specifically, two of the department’s academics Lilah Grace Canevaro and Mirko Canevaro have set up a UK-wide network to support and promote working-class classicists – staff and students. The network’s inaugural event ‘Working-Class Classics: a Conversation’, held in April this year, attracted 60 attendees and 10 guest speakers.

Head of Classics, Lucy Grig attended the event. She says: “People were speaking openly, maybe for the first time about their experiences, although I do think, while Classics has some specific issues linked to certain types of languages studied, some of these challenges aren’t just subject-specific. University can be a pretty alienating place for many students from less advantaged backgrounds, whether they’re studying Classics or something else, and that’s a fact.”

For Lauren, who now sees some of those students struggle with confidence and insecurity in her role as Student Support Officer, student societies can have an important role to play in addressing some of these challenges.

“Support your societies a lot more. I know finding funding is always hard but they are at the grassroots, talking to the students when they come. It’s the societies who help you develop those friendships that do push you through when you’re having a tough time. I love Classics but I also just need a hug now and again, and someone to say it’s alright we can do this together,” she says.

“I came here at 26 to learn ancient history only because of my own perseverance. I never got pushed into it in school, it was never something that was encouraged, or even an option. That’s why I try to be very vocal about widening participation because I can sympathise with so much of what you’re going through if you’re on a low income. My mum and dad didn’t go to university. My dad’s a welder, my mum ran a pub. There’s nothing about me that screams entitlement, it just screams: if you’ve got a passion you go for it.”

This piece was originally published on the Edinburgh Impact site.

Why we need to talk about class in Classics / Bulletin magazine by blogadmin is licensed under a Creative Commons Attribution CC BY 3.0
communitystaff